The Structure of the Collection 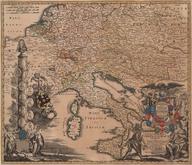 A collection of such an enormous scale (the Karel Kuchar catalogue lists nearly 12,000 maps and prints) had to be divided internally. The map of Imperial counties by prominent German cartographer and map publisher Johann Christoph Homann, "Tabula Geographica Europae Austriacae Generalis" served as a key for the collection's division. Bernhard Paul Moll divided the collection of maps and landscape paintings into two basic atlases - the one that is greater in scope is called Atlas Austriacus, the smaller one Atlas Germanicus. The first one comprises of countries that were subject to immediate Habsburg rule, the other one is made up of material regarding sovereign areas of the Empire, where Habsburg reign was derived from the title of Roman emperors. Further division is based on the lesser political entities, which made up the above mentioned territories - imperial counties. Each region is then typically divided into separate sovereign states or hereditary imperial Habsburg lands. The Austrian Atlas thus contains four basic units - actual Austrian lands along with the Czech lands, the Burgundy region (the United Provinces of Netherlands /Dutch Republic/ and the Austrian Netherlands), maps of Italy and finally maps of Hungary, also known as the Hungarian Atlas. The Atlas Germanicus is divided into the regions of Bavaria, Franconia, Upper Rhine, Lower Rhine, Upper Saxony, Lower Saxony, Swabia and the Westphalia Imperial Circles. In the last volume there are maps of Switzerland. The volumes are then further divided into sections by country (e.g., Moravia, Lower Austria), together both atlases contain 68 of these sections. These sections usually contain general maps of the area along with historical maps at the beginning, followed by partial maps of particular areas or cities. In cases where there are more maps, they are grouped according to the depicted location. So-called "curiosa" - hand drawn plans of mines, ancient ruins, and stones with ancient inscriptions are set aside. Collections of vedute, especially from the workshops of Merian, Vischer and Valvasor, are sometimes scattered throughout the works according to the names of cities, sometimes preserved in near original publishing order.

The structure of the collection is captured in the original manuscript catalogues, which have survived until today. These are comprehensive mapographic inventories supplemented with both texts relating to the pictured sites, as well as the accompanying illustrations. Moll prepared 20 manuscript volumes entitled the White Catalogues based on the volumes' white parchment binding. In some cases even duplicates have been preserved. In addition to the definitive White Catalogues, older catalogues have survived, newly bound in brown, as well as the catalogues' concepts and reviews of both atlases by Friedrich Vockel. Of particular interest were the parts of the catalogue showing Hungarian countries even after the death of Bernhard Paul Moll. Moll's ties to this area were particularly close, especially in the last period of the atlas's creation. As a Protestant, he had his son study at the noted Evangelical Lyceum in Bratislava. Most likely the contacts he established there gave rise to a copy of the section of the catalogue regarding Hungary. The volume soon fell into the hands of prominent Hungarian nobleman Ferenc Széchényi (whose private library became the base of the Hungarian National Library bearing the name Szechenyi) raising a considerable response in Budapest's intellectual circles. It was among the first Hungarian map inventories, and may have been considered as the base for the Atlas of Hungary. The importance of this map inventory for the Hungarian territory is evidenced by the fact that Hungarian researchers are still interested in the Moll collection today.